In Uluru, the mixed netball competition is fast and serious. Everyone is highly competitive and super athletic. Team spirits are high because everyone wants to win for their colleagues. The teams are;

– Sails in the Desert Hotel

– And randoms – the members are from various tourism and hospitality companies and also some of the local Police men.

Unfortunately our Segway team is sitting firmly at the bottom of the scoring board. Our best match so far 14 vs 13 with a loss by one point.

Last Tuesday resulted in some impressive matches to watch. The Desert Gardens Hotel team scored an impressive 43 points and the Sails in the Desert team scored 23 points in the following game. 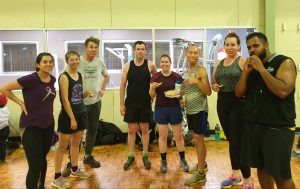